Let’s put those bits to use. Let’s store some stuff. Starting with numbers.

To understand binary, let’s take a closer look at how decimal numbers work. Take the number “101” in decimal:

Notice how the places in base 10 (ones place, tens place, hundreds place, etc.) are sequential powers of 10:

The places in binary (base 2) are sequential powers of 2:

So let’s take that same “101” but this time let’s read it as a binary number: 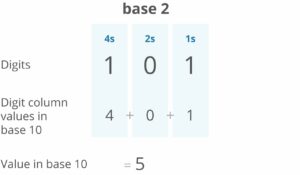 So far we’ve been talking about unsigned integers (“unsigned” means non-negative, and “integer” means a whole number, not a fraction or decimal). Storing other numbers isn’t hard though. Here’s how some other numbers could be stored:

Fractions: Store two numbers: the numerator and the denominator.

Negative Numbers: Reserve the leftmost bit for expressing the sign of the number. 0 for positive and 1 for negative.

In reality we usually do something slightly fancier for each of these. But these approaches work, and they show how we can express some complex stuff with just 1s and 0s.

We’ve talked about base 10 and base 2…you may have also seen base 16, also called hexadecimal or hex.